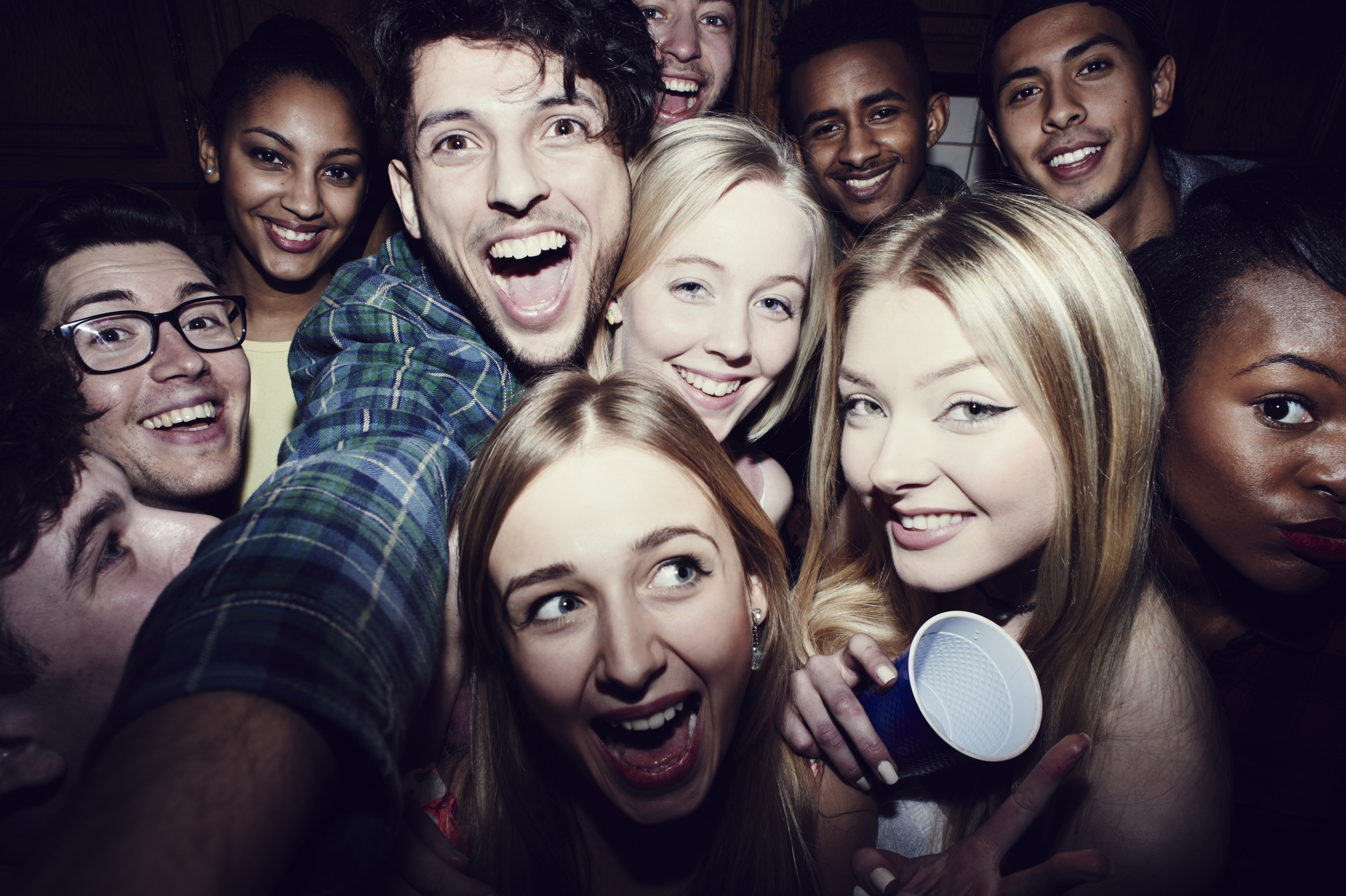 Selfie posing in a group causes a whole set of problems. We can guarantee that in any group photo where you look awesome, someone else has their eyes closed, or their hair is doing something wacky, or they're pulling a face. Not to mention that everyone has their own angles, which means you'll switch positions nine times and someone will still say, "But this isn't my good side."

So, next time World War III is about to break out in your friendship group because you can't get a nice photo, follow these tips.

Some people prefer the left side of their face, some the right, and some really don't care. Start by making sure people are showing their best side; those that don't mind can be in the middle. If everyone tilts in the same direction, it'll look a bit too coordinated, so as long as everyone is on the right side, make sure you've all got a slightly different head tilt. Everyone is happy, and you won't look staged.

If it's just you and one other friend, it's ideal if you both like taking photos from different sides. The problem comes when you both want the same side; who gives in? Well, how about no one? Stand behind your friend, or have them stand behind you. Throw an arm over their shoulder and have them take the photo.

Alternatively, stand next to each other but have one of you facing away from the camera. Look sideways at the person taking the picture to capture a cute moment that is all about each other.

It's unlikely that everyone in the photo is exactly the same height. Instead of standing next to each other, have the tall people stand behind the others and put their faces in the gaps. Not only does this make you closer together, but you'll also get a more interesting picture with some people closer and some farther away. Alternatively, you could have one person standing while the others sit.

If you want an unusual selfie, get everyone to stand in a circle facing inwards. If everyone leans forwards and looks down, take a photo from below. You can all link arms behind your back to avoid awkward limbs hanging down. It's a cute way to show your whole friendship group without worrying about who needs to stand where.

We always think the selfie-taker has to be on the end of the line, but actually, if the person taking the photo is in the middle, you can end up with a really cute effect with lots of focus on the person in the middle. This is great for celebrations and achievements as it really shows off one person — and all the love and support that surrounds them. Use both hands to hold the phone as your arms will act as lines drawing the eye to the person in the center.

Want a cute selfie pose for three friends or more while you’re hanging out? The next time you’re out at a restaurant, snap a quick selfie with the table in the background. But this part's crucial: Don’t tell anyone you’re taking a picture!

You’ll be able to capture the genuine interactions (and reactions!) of everyone around the table at that moment. If you’re out and about and people are getting ready to take a group photo, try taking a shot when people aren’t expecting it—before everyone strikes their go-to poses. Sometimes the “Oh, I didn’t see you there” candid pose looks better than posed shots.

7) Focus on the face

Selfie poses with friends don’t have to showcase your entire body. When people pose for a group selfie, they tend to get their bodies as close as they can to each other ... but that may not be enough! If you have a lot of people to squeeze into the shot, tell everyone to get their heads together.

If only Bradley's arm was longer. Best photo ever. #oscars pic.twitter.com/C9U5NOtGap

Think Ellen DeGeneres and that group selfie at the Oscars. Just remember to hold the camera slightly above everyone’s head—this is by far the most universally flattering angle, and your friends will thank you for it.

One way to fit everyone in is by having the person taking the selfie stand in the foreground. The rest of the group should stand a little farther back, so they fill out the background.

This one can be tricky, because if you’re too far apart you may not be able to keep everyone in focus. A little separation can be the difference between getting everyone in the frame and cutting off half of Marcy’s face.

9) Use your phone's burst feature

The larger your group selfie pose, the harder it is to make sure everyone is looking at the camera. This is where the burst feature on your phone can come in handy.

No one wants to stand around while you take 10 different pictures individually. With burst mode, you’ll get a bunch of pictures in a short amount of time, and afterward you can look through them and pick the best one(s). Easy!

10) Choose someone to take the lead

Whether it's you taking the picture or the person in your group with the longest arms, choose someone to take on the role of "director" and coordinate your group selfie pose. Having one person decide where everyone should go and how they should stand is much easier than having eight people scurrying around trying to figure out who they want to stand next to.

Bonus: Even more ideas for selfie poses with friends

Looking for more group photo poses? We've got what the doctor ordered. Try these creative selfie poses with friends and you’ll be the envy of your Instagram feed:

You love your squad, but finding the right selfie poses with friends can be a lot harder than you think. Use these 10 tips to experiment and find the best group selfie poses for your friend group. You’ll be posing like a bunch of pros in no time. Oh, and if you want a little more horsepower, check out Facetune2, the best selfie editor app for even the pickiest of your friends.